Hey everyone -- any suggestions for Indigenous texts I could add to a course on popular horror fiction? I would guess that there are a lot of traditional stories that would work here, and I might want to to use those, but I'm esp. interested in longer contemporary works: shorter novels, for instance, that could be paired with someone like Stephen King. Thanks in advance...

Hi Mike -- Have a look at this article by Alicia Elliott on cbc.ca (it discusses a number of recent novels and films in the 'Indigenous horror genre')...
https://www.cbc.ca/arts/the-rise-of-indigenous-horror-how-a-fiction-genre-is-confronting-a-monstrous-reality-1.5323428]

Elliott makes a strong case for the distinctiveness of the genre and provides some hints about how such works might be thematized in the classroom:

"It's remarkable to consider that many non-Indigenous horror writers depict situations that Indigenous people have already weathered — such as apocalyptic viral outbreaks that decimate whole populations — or use the history of genocidal violence against us to explain why innocent white folks are being haunted today, such as in Stephen King's It or the 1982 film Poltergeist. In fact, I'm not sure what scares non-Indigenous horror writers and readers more: experiencing variations of what Indigenous folks have already endured for centuries, or the reality that they have built their entire country on literal Indian burial grounds.
Indigenous writers, on the other hand, acknowledge the mundane horror of living in a country that dehumanizes you, weaving the reality of Indigenous life with fiction to scare audiences. In Waubgeshig Rice's Moon of the Crusted Snow, for example, the apocalyptic event that ends life as we know it — taking out power, internet, phones, satellites, etc. — isn't even really noticed as an apocalyptic event at first; it's just another day on a northern rez, where power can go out at any time and internet and phone signals aren't always available. As Nick, a young Anishinaabe man, points out, "We thought it was kinda funny...The blackout was only two days, but it seemed like some people were already freaking out a little bit. I was just like, 'Come to the rez, this shit happens all the time!'" Once it becomes apparent that things have changed forever, the protagonist Evan observes that "the milestones he [now] used to mark time were the deaths in the community…as people perished through sickness, mishap, violence or by their own hands." He notes that northern reserves like his are "familiar with tragedy," the result of generations of intergenerational trauma and genocide — only now this tragedy is magnified." - A. Elliott

I taught A.A. Carr's (Navajo, Laguna Pueblo) Eye Killers a number of years ago and it seemed to go over well. I've read and enjoyed (but not yet taught) Eden Robinson's (Haisla) Traplines and Monkey Beach, so-called "Indigenous Gothic" works. I've also just started Stephen Graham Jones' (Blackfeet) recently published The Only Good Indians and may consider teaching it (or another of his novels) in the future...

I just want to recommend Cherie Dimaline's The Marrow Thieves as a wonderful 'horror/Gothic' work which came out about 3 yrs ago.
Here's part of the publisher's brief description: "The indigenous people of North America are being hunted and harvested for their bone marrow, which carries the key to recovering something the rest of the population has lost: the ability to dream." 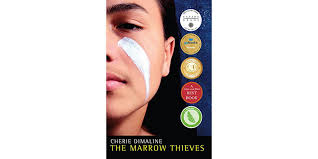 And ... for anyone interested in some leads on Indigenous Sci-Fi (which, as readers of the genres know, often overlaps with Horror), check out this recent NYTimes article by Alexandra Alter.
https://www.nytimes.com/2020/08/14/books/indigenous-native-american-sci-fi-horror.html?auth=linked-google
As she writes...

[Cherie] Dimaline, along with Waubgeshig Rice, Rebecca Roanhorse, Darcie Little Badger and Stephen Graham Jones, who has been called “the Jordan Peele of horror literature,” are some of the Indigenous novelists reshaping North American science fiction, horror and fantasy — genres in which Native writers have long been overlooked.
Their fiction often draws on Native American and First Nations mythology and narrative traditions in ways that upend stereotypes about Indigenous literature and cultures. And the authors are gaining recognition in a corner of the literary world that has traditionally been white, male and Eurocentric, rooted in Western mythology.
“There’s a big push now for the telling of Indigenous stories,” Dimaline said. “The only way I know who I am and who my community is, and the ways in which we survive and adapt, is through stories.”
As more Indigenous authors break into the genres, there has been an explosion of novels, comics, graphic novels and short stories from writers blending sci-fi and fantasy with Native narratives, writing everything from “slipstream” alternate realities to supernatural horror to post-apocalyptic stories about environmental collapse.
“There’s so much variety and so much experimentation,” said Grace L. Dillon, a professor in the Indigenous Nations Studies Program at Portland State University, who edited “Walking the Clouds,” an anthology of Indigenous science fiction published in 2012.
[...]
Some authors say that sci-fi and fantasy settings allow them to reimagine the Native experience in ways that wouldn’t be possible in realistic fiction. Writing futuristic narratives and building fantasy worlds provide a measure of freedom to tell stories that feel experimental and innovative, and aren’t weighted down by the legacies of genocide and colonialism.
“We’ve already survived an apocalypse,” said Roanhorse, who is of Ohkay Owingeh Pueblo descent. - Alexandra Alter